View all of our newsletters and webinars on our Resources page.

In our second issue of The Wider View during Women’s History Month, we are proud to feature advisor to Work Wider and the new GVP of Product Management Operations & Analytics at Gartner, Mina Seetharaman. As you probably know from watching her moderate two Work Wider webinars — and if you haven’t watched them, you can check them out here — Mina has long been an advocate for more inclusive teams at work. Believing that people are most productive when they are free to bring their whole selves to work, Mina has worked throughout her career to create inclusive environments by spearheading cultural and operational changes internally that mirror the constantly morphing external business and social environments. Read more about her below, especially about why she considers adversity the professional equivalent of a dare!

Adversity and champions. Like everyone else, I sometimes whine about how I wish things were easier on a particularly frustrating day. But the reality is that I feel utterly compelled to overcome a challenge or prove I can do something that someone else claims to be too hard. For me, adversity is like the professional equivalent of a dare.

But also like everyone else, I have moments of doubt and frustration. Sometimes it comes from within, sometimes it’s tied to a less-than-hospitable environment. I’ve been so lucky to work for and with people who have believed in me when I faltered in that regard. They are like hands on your back in a race when you think you have nothing more to give.

Resumes highlight professional and educational achievements. Which one of your life or personal experiences deserves to be on your resume?

My dad died of cancer two weeks before I started 10th grade. I was heartbroken — he and I were very close — but his illness was protracted, so it was not a wholly unexpected outcome. He was an engineer and used to help me with my math homework a lot. I remember thinking that without his help, I was going to either sink or swim in math, and I expected the worse of those two outcomes.

That year, I had a fantastic math teacher, Mr. Mielke who simply refused to believe that people “weren’t good” at math. Instead, he helped us find our own way into it. I finished that year at the top of my math class – and achieved 90’s in every subsequent math class I took in high school. In my head, I went from being “a girl who wasn’t good at math” to being someone who felt confident I had the tools to find the right answer.

That year taught me that I have the fortitude to find my way to the other side of seemingly insurmountable loss. It also taught me that sometimes my own lack of self-belief has held me back. When I sense that I’m preempting my own potential for success, I try to remind myself to get out of my own way. Finally, I really try to model myself on people in my life like Mr. Mielke — can I help the people around me find their own way into success? On paper, the death of a parent hardly seems like an accomplishment, but what I learned about myself on the other side definitely was.

Curiosity. I often say that if a job requires 5 hard skills, and a candidate has 3 of them, but they’re incredibly curious, I’ll consider hiring them. I can likely teach them the hard skills, but I cannot teach them to approach each challenge with curiosity and wonder, to fall in love with a problem — that’s either in you, or it’s not.

There are, of course, some exceptions. I am very much a collaborative leader who treats my teams as coalitions. If I’m hiring to fill my own skills gap, then the hard skills matter much more. But that would be in addition to curiosity, not in place of it.

“I like to live at the intersection of being terrified and being excited; it means the decision you have made is filled with promise, and that regardless of the outcome, you will learn something that becomes part of your toolbox for life.”

What’s one piece of career advice you wish you could give to your younger self?

This answer often changes. Right now, I’m starting a new role that takes me out of my comfort zone, which has become something of a pre-requisite for me in choosing a new job. I like to live at the intersection of being terrified and being excited; it means the decision you have made is filled with promise, and that regardless of the outcome, you will learn something that becomes part of your toolbox for life.

But this past year was hard for so many people. I saw many of my amazing friends and former colleagues (many women, but not exclusively) really beat up on themselves — and I did this to myself at times as well. It’s difficult not to; If you are an accomplished, resourceful person, and things are not going well, the natural instinct is to consider what you have done wrong to yield the current situation. But I’ve been telling so many this year to speak to themselves as they would to their best friend. Whatever your technique in this — the “shit” sandwich, the “good news-bad news” approach — we would never be as mean or cruel to a friend as we are to ourselves.

I think I would tell my younger self that there are hard times ahead and you will always pull through. Listen to the criticism, so that you are self-aware and grow, but don’t let it outweigh the admirable qualities you possess, because those carry you through the difficult periods and help you be ready for whatever is next.

Which three books, podcasts, or news sources do you think everyone should read? Why?

It’s really hard to pin this down to only three. I’m less a fan of breaking news, which all seems designed to generate clicks and knee-jerk responses, and more a fan of analysis that helps me connect dots. Publications like MIT Tech Review, Foreign Affairs, The Economist, and The Atlantic that either go deep on a topic or synthesize a range of perspectives are of particular interest to me.

Recently, I read the book Range by David Epstein. It was refreshing to read something that put stock in smart generalists who don’t just understand specialized content, but place things into context. I felt seen. In corporate life, I think we’ve very much over-indexed on specialties and have forgotten that finding the connections across seemingly disparate things can yield valuable breakthroughs. I also really recommend Switch by Chip and Dan Heath. It’s a fantastic book about driving change when you are not necessarily the most senior leader at a company.

Adam Grant’s podcast “Work/Life” is really fantastic. How can you not like a podcast that’s about companies and people who are figuring out how not to make work suck?

But I really cannot recommend enough engaging with things that perhaps have nothing directly to do with your job, that open your mind to new ideas, or analogs you might not have considered. I read a lot of fiction because it helps me consider pacing in my own narratives. I really like “The Weirdest Thing I Learned This Week” — a podcast from Popular Science — because it’s all about curiosity in the world around us. Widening your aperture will never steer you wrong.

This is a question that I reckon with on a daily basis; I often feel like I could be doing so much more.

At work, I look around and ask questions about why things might look the way they do. I recently started a new role and asked if we know what the diversity make up of our group is. It wasn’t a judgement of my new environment; I wanted to have a baseline to understand where we are succeeding and where there is still opportunity to improve (there is always opportunity). Both parts of that equation are important and require their own kind of vigilance. Then I volunteered to play an active role, whatever that may look like, in our efforts on this front. Leadership can come from the top, the middle, even the more junior ranks of a company.

I am a woman of color who is over 40. In many environments I am a diverse candidate, but it’s not lost on me that in many situations, I have a lot of privilege and I can put that to work for others — we can all be an ally to someone in a given situation.

DE&I is a complex issue that can seem daunting to tackle. At the end of the day, you just need to make a commitment — even small ones add up. For example, as I was completing this interview, I remembered that I committed to myself that I would nominate more women of color from my own network into a networking group of which I am a part. I had not yet done it, so I paused what I was doing, went through my network, and submitted nominations for some amazing WOC I know.  I also realized that despite being a POC, I mostly watched white influencers on YouTube, so I actively searched on black and brown influencers in all the topic areas I watch and changed up the mix.

Finally, I let my kids take the lead. They are naturally curious and in feeding that curiosity, I get the benefit of learning. I’m honest about what I don’t know, use it as an opportunity for us to look things up, and have open conversations with them about race, gender, and inequality.

What’s one tangible step every employer should take to help build a more representative organization?

Don’t defend why things are the way they are – make a plan for how to improve them. We all naturally want to defend or make excuses for our current state; no one wants to feel like they are at fault. But it’s a lot like dating (I liken almost everything to dating): you can’t change your past, but you can be aware enough not to perpetuate the same errors. Unlike dating, the issues surrounding DE&I are not about you personally — they are about reworking systems that have been designed to serve only a subset of people. Own the history and take agency in shaping the future.

View all of our newsletters and webinars on our Resources page. 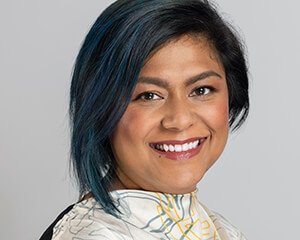